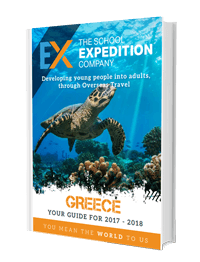 This is great first expedition for Students, Parents and Teachers. It is also one we love leading – Camping on the beach, working on a Turtle Conservation Project and White Water Rafting! What more could you ask for.

Why is this expedition so good as a first one?

This expedition is a 10-12 day trip, so it is great for students of all ages. It is also a perfect expedition to introduce overseas expeditions to younger year groups – We have taken had 13-14 years olds on this Greece school expedition.

Working with animals is always something that is really popular on an expedition and also it is educational. It gets really good sign ups.

With the expedition staying within Europe this really does give piece of mind to parents and the school.

We have the Adventure, Conservation, R&R and Culture all rolled into one expedition.

This expedition is great value for money compared to others, therefore it makes it available to all students.

Climate – The climate in Greece is typically Mediterranean with warm and dry summers and mild winters.

Religion – The Majority belong to the Greek Orthodox Church

Greece is considered the cradle of Western civilization, being the birthplace of democracy, Western Philosophy, democracy, the Olympic Games and much much more!

Greece is one of the world’s most popular destinations with ancient and modern attractions such as museums of the ancient and Byzantine eras and archaeological sites and cities, all of them historical monuments which have inspired modern education and culture around the world.

Located in southern Europe, Greece forms an irregular-shaped peninsula in the Mediterranean with two additional large peninsulas projecting from it: the Chalcidice and the Peloponnese. The Greek islands are generally subdivided into two groups, according to location: the Ionian islands (including Corfu, Cephalonia, and Leucas) west of the mainland and the Aegean islands (including Euboea, Samos, Chios, Lesbos, and Crete) to the east and south. North-central Greece, Epirus, and western Macedonia are all mountainous. The main chain of the Pindus Mountains extends from northwest Greece to the Peloponnese. Mount Olympus, rising to 9,570 ft (2,909 m), is the highest point in the country.

Traces of a centuries-old and important history is etched in every corner of Greek land: findings from the Prehistoric and Archaic Periods, unique works from Classical, Hellenistic, Medieval and Byzantine monuments, creations from folk art cultures, traces from the passing eons of other civilisations and different religions, that coexist with current creations, constructions and modern works of art.

Greece is a true paradise for cultural tourism, a large journey into history and art. Educational excursions, theatrical productions, festivals, pilgrimages, visits to archaeological sites, monuments and museums, excursions to study the natural environment, folk art and culture – these are just a few of the many things that Greece has to offer in the cultural tourism sector